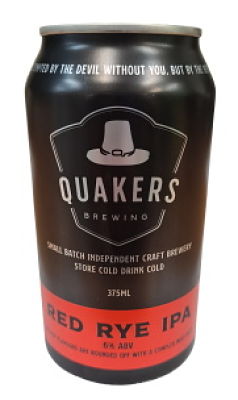 Skip to the beginning of the images gallery
About the Beer
This is a dark, malty brew coupled with big hop flavours reminiscent of blackberry and tropical fruits. As the name suggests it pours a deep red colour. The rye kicks up some spicy notes which meld nicely with the malt backbone and fruity hop profile.

The body is big enough you know it’s there, but not overwhelmingly chewy, making it drinkable enough to sink a few.
About the Brewery
When a father and two sons started home brewing beer down in Quakers Hat Bay, none of them thought they would be doing it for a living a few years later. Throwing caution to the wind they decided to clear out the storage space of the Father’s furniture workshop in Manly Vale and squeeze in a thousand litre brewery. Since then Quakers Hat Brewing has been releasing delicious takes on classic beers as well some new and inventive styles. Focusing on the local market Quakers has been supplying pubs and bottle shops in Sydney’s metro and north shore, both in cans and on tap.
Reviews
Write Your Own Review
Liquor Licence
LIQW880015129
Product Questions
Customer Questions
No Questions
Did you find what you were looking for?
Other products from this Brewer
We found other products you might like!